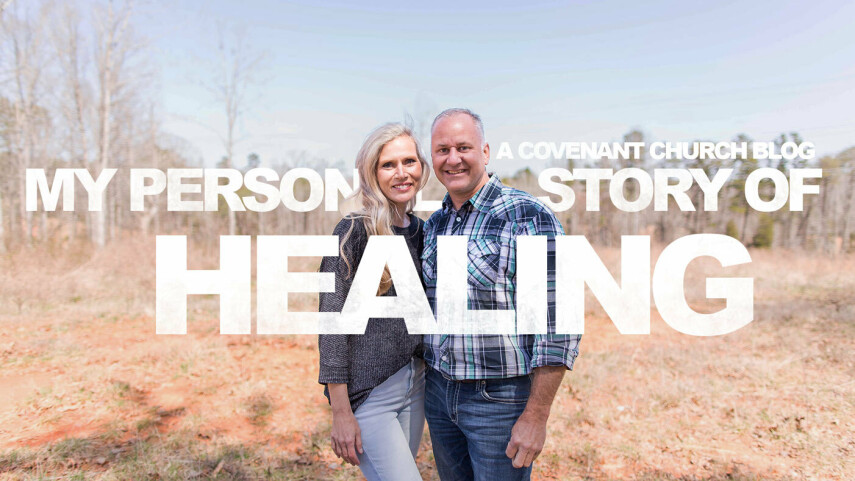 I want to share with you my personal story on healing.

In 2010, Steven and I began attending a Spirit-filled church. At the time I didn’t realize they were classified as “Spirit-filled” and even if I would have known, I would have had no clue what “Spirit-filled” meant! (I now know that it means that the church believes in all the gifts of the Spirit and also operates in those gifts.)

Anyway, Steven fell in love with everything about the church and he was experiencing spiritual freedom in learning about God’s love, grace, mercy, hope, healing, restoration, etc! He was so excited and was being healed spiritually, mentally, and emotionally every single week!

Me....well...sad to say, but I wasn’t as gung-ho as Steven was. Quite the opposite actually. I dug my heels in and protested (and cried) almost every single week. Things went from out-of-my-control to even worse (or so I thought)! Steven would randomly meet people at work or at gas stations, on the street, everywhere, that would invite him to services or meetings, and guess what, we would go!! HE was so hungry for the Lord! And while Steven was experiencing new life, freedom, and hope as I had never witnessed before, I was more discouraged, depressed, and disappointed than ever before. I was not only emotionally as low as I could go, but I was also physically at my breaking point.

In one year, 12 months, I had gone to the doctor at least fifteen times for an infection my body couldn’t get rid of. After a year of what felt like being a Ginny pig, they put me on a once-a-week treatment that didn’t fix the issue, just covered it up. After that, my back began hurting, really bad. So much so, that I was going to the chiropractor two to three times per WEEK! I ended up at a surgeon's office in Charlotte and received a steroid shot to my lower back and the possibility of surgery. My breaking point during this time was when I received the diagnosis of IC (interstitial cystitis), a painful autoimmune disease that attacks your bladder. The doctor said that mine was the worse case he had ever seen. He said there was no cure for it, only a pill to help with the pain. Over the course of walking through IC, I discovered my body couldn’t handle gluten. I cut out all gluten from my diet. I was going through all of this while my heart ached to be a mom.

Now, I’ve just listed what the doctors had told me and what I was experiencing in my body/my flesh. Steven, who was so on fire and in love with God, began to discover what God had made available to us through the life and death of His Son, Jesus Christ. He would take me to healing services, have people come lay hands on me and pray, and I honestly didn’t want any part of it. I was so calloused and was done trying to figure things out.

I found great comfort in the love of Steven’s Great Aunt, Aunt Jeanne. She would minister to me, share the Word with me, and encouraged me to pick up my Bible and read it for myself; read it as if it was the first time I had ever opened it. She said read Acts and let the Word tell you about the power and baptism of the Holy Spirit. She said read about the gifts of the Spirit and don’t put on the lens of your past beliefs and doctrine. I took her advice and I can honestly say, I have fallen in love with the Word. It really was life to my flesh! (Proverbs 4)

I began believing what the Word said! I began believing that even though my flesh was in a mess, that Jesus paid for me to be healed and to walk in healing. I studied the passages that had to do with physical and emotional healing. I decided that if God was offering me something, I was going to humble myself and receive it. It had been prideful on my part to exalt my opinions, my beliefs (or lack thereof), my theology over what the Word of God clearly said.

Let me say this, I fault no one but myself for my lack of knowledge in healing, the gifts of the Spirit, and the baptism of the Spirit. I have had a Bible available to me since I was a child. It was no one's fault but my own that I listened to man over God. It was no one's fault by my own that I only believed God wanted to take me to heaven, but I just had to suffer through life on earth, taking whatever the enemy put on me. Hosea 4:6 says that people perish for lack of knowledge. Oh, how true that is. I was perishing because of my lack of knowledge and also my pride in thinking I knew everything there was to know about God, His Word, and His Spirit.

Let me tell you what believing in God and taking Him at His Word has done for me:
I am completely healed of IC! (Which by human standards is impossible)!

My back has been restored and it’s stronger than ever!

I no longer have to take my once-a-week pill for those repetitive infections I was having.

And after two years of eating Gluten Free, I can now eat anything!!!

Praise the Lord, my God is a Healer! (Jehovah-Rapha)It is always God’s will to heal! Always (Luke 5:12-16)! What He has done for me, He will do for you! He is no respecter of persons. I share my healing testimonies with you for several reasons, one of which is because it builds faith. Testimony means, “do it again!” We are two weeks away from having a healing service at the Prayer Room. You can receive the healing God has already provided for you. Yes, He WANTS you healed! It takes faith to come to such a meeting. Believe me, I had never been more uncomfortable than when Steven drug me to a healing service...but I am eternally grateful that he did. When I had no faith in my healing, Steven had it for me.

God loves you so much dear friend, and He wants you well. He wants you to live the “abundant life” He spoke of in John 10:10. And quite frankly, what have you got to lose? 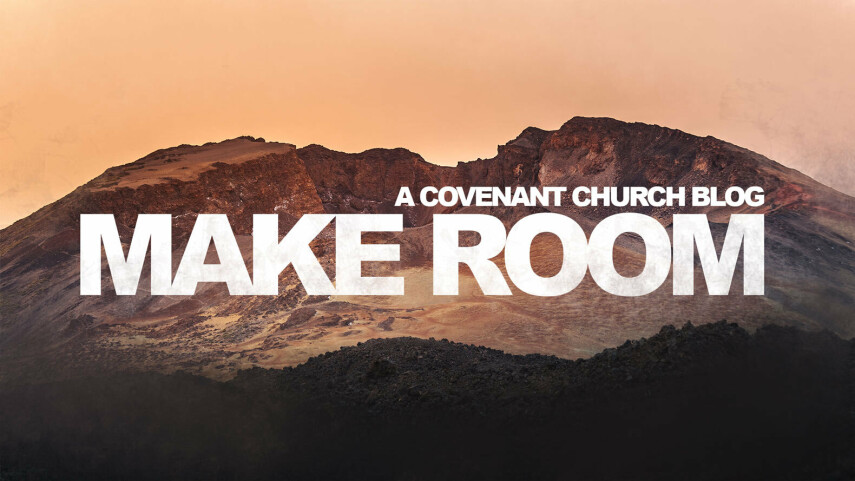 About a month ago, we were in worship and Pastor Mike came up and said that during worship the Lord had given him two words, “Make Room.” He said keep making room for the Lord to make you into a dwelling place for Himself. I’ve been meditating on that over the past few weeks and this bible story of “The Widow’s Oil” popped in my head from 2 Kings 4.

The wife of a man from the company of the prophets cried out to Elisha, “Your servant my husband is dead, and you know that he revered the Lord. But now his creditor is coming to take my two boys as his slaves.” 2 Elisha replied to her, “How can I help you? Tell me, what do you have in your house?” “Your servant has nothing there at all,” she said, “except a small jar of olive oil.” 3 Elisha said, “Go around and ask all your neighbors for empty jars. Don’t ask for just a few. 4 Then go inside and shut the door behind you and your sons. Pour oil into all the jars, and as each is filled, put it to one side.” 5 She left him and shut the door behind her and her sons. They brought the jars to her and she kept pouring. 6 When all the jars were full, she said to her son, “Bring me another one.” But he replied, “There is not a jar left.” Then the oil stopped flowing. 7 She went and told the man of God, and he said, “Go, sell the oil and pay your debts. You and your sons can live on what is left.”

There are a few things in this story that spoke deeply to my heart. First, Elisha asked her what she had in her house. She only had a little bit of olive oil. Sometimes we can look at our small offering, that little bit of oil in our house, the gift we hold that seems insignificant, and believe God can’t use it. Our tiny bit of oil in the hands of our God becomes a river of oil overflowing into the lives around us. Use what you have in your house and make room for Him to transform that seemingly insignificant amount of time, talent, or sacrifice.

Secondly, Elisha told her to go ask all her neighbors for empty jars so she went to each neighbor making this request. Can you imagine how crazy she must have looked and the faith she was required to walk in before the miracle happened? She was radically obedient to the word of the Lord through the prophet Elisha in spite of how she appeared to those around her. Fear of man and their approval would have shut off the flow of the oil. Fear of man in our own lives can hinder the work of the Holy Spirit in our lives. She made room for the Holy Spirit by emptying out and laying down her own life believing for the miracle not yet seen and He begins to pour out. If you don’t have an empty vessel, it cannot be filled. Emptying ourselves of our own desires, distractions, pride, and selfish motives and laying them at the feet of Jesus gives space for our hearts to be filled with His pure and perfect desires and plans for our lives.

I continued to read through this story a couple of times and the part that struck me most was when she shut the door behind her and started to pour the oil into the jars. What if? What if we shut the door behind us and made room for Him to pour out in each area of our lives. This requires shutting out the world and making the space and time to be alone in the presence of God. The widow made room in her life for God to come in and change her family, her finances and her future. There were no neighbors there peeking over her shoulder making sure she was doing it right. She trusted that when the door was shut, He would show up.  And guess what? The oil started to flow and continued to flow until every bit of space had been used up. Every available container was filled to the brim with the oil. She was hopeless but when she made room, her life changed. By giving Him what we see as our small, insignificant gift, walking in radical obedience, emptying ourselves of ourselves, and going into the secret place to meet with the King of Kings, we too can have a transformed life.

“I will make room for You to do whatever You want to.”

Posted by Kerri Crutchfield with