“He Will Do The Rest” 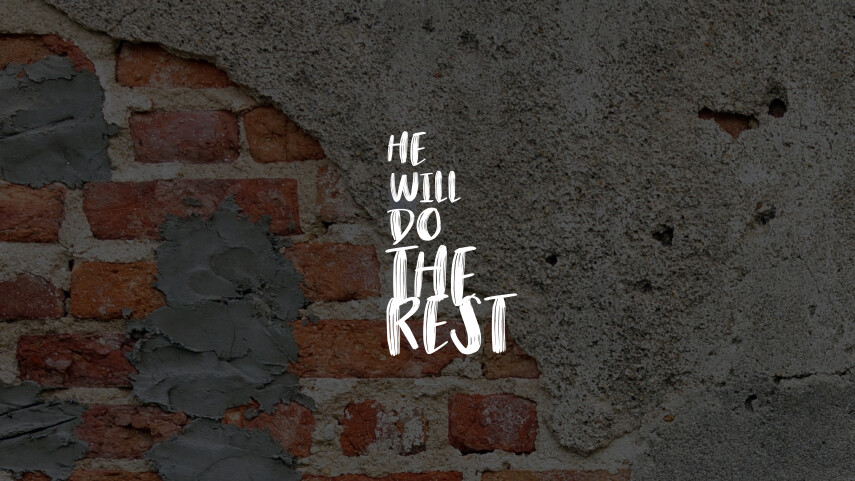 1 Samuel 16:1-12 But the LORD said to Samuel, “Do not look at his appearance or at his physical stature, because I have refused him. For the LORD does not see as man sees; for man looks at the outward appearance, but the LORD looks at the heart.” 8 So Jesse called Abinadab, and made him pass before Samuel. And he said, “Neither has the LORD chosen this one.” 9 Then Jesse made Shammah pass by. And he said, “Neither has the LORD chosen this one.” 10 Thus Jesse made seven of his sons pass before Samuel. And Samuel said to Jesse, “The LORD has not chosen these.” 11 And Samuel said to Jesse, “Are all the young men here?” Then he said, “There remains yet the youngest, and there he is, keeping the sheep.” And Samuel said to Jesse, “Send and bring him. For we will not sit down till he comes here.” 12 So he sent and brought him in. Now he was ruddy, with bright eyes, and good-looking. And the LORD said, “Arise, anoint him; for this is the one!”

There is one thing about God that you can never predict; who He will choose for a particular task. When the Lord had given Samuel a prophetic Word to go to Jesse to anoint one of his sons as the next king of Israel, no- body expected that son to be David. In fact, David wasn’t even invited to the party.

His own father, who probably knew him better than anyone on earth; didn’t even think to include him among the candidates for Samuel to observe. It is only after Samuel had looked over all the other sons that David was even mentioned. I find this story not only interesting, but in many ways; beautiful and full of grace.

You see, we are all a lot like Jesse. When we think of who God will pick for a particular calling, we will often make an assessment based on our experience or preference. Many of us even make the same mistake when we look at our own lives in reference to whether or not God would choose us for a mission.

We often see ourselves as ineligible. We remember all the failures of our past and immediately imagine that “God could never use us.” This is the part of the story where we must admit that God isn’t very much like us. God will often choose the one everybody else has overlooked. He is a God of mercy. He doesn’t need our talents or our gifting. He just needs one who is willing to say yes. He will do the rest.